Tendons of the cervical multifidus muscles insert directly onto the capsular ligaments (Winkelstein et al., 2001; Anderson et al., 2005) and it has been postulated that multifidus activation during the neuromuscular response to a rear-end automobile impact could increase the strain in the capsular ligaments above that imposed passively by the impact-induced head and neck dynamics (Winkelstein et al., 2001; Siegmund et al., 2000). It remains unclear, however, if the multifidus muscles activate reflexively during a whiplash response. The neuromuscular response to a whiplash exposure contains both a postural and a startle response (Blouin et al., 2006a).

This combined postural/startle response was observed in surface electromyograms of the sternocleidomastoid and cervical paraspinal muscles with and without the loud sound that accompanies a vehicle crash (Blouin et al., 2006a), although the muscle response amplitude was larger with the loud sound (Blouin et al., 2006b). These prior findings suggest that the startle response amplifies the neck muscle response and could increase the potential for a capsule-based whiplash injury. But because these prior studies used only surface recordings of muscle activity, it remains unclear whether the deep multifidus muscles are active during a startle response. The goal of this study was to measure the electromyographic (EMG) response of the cervical multifidus muscle during exposures to both a simulated rear-end collision and a loud acoustic stimulus capable of evoking a startle response.

“Evidence of reflex activation of the multifidus to one or both of these stimuli would provide evidence supporting a potential neuromuscular contribution to the genesis of facet based whiplash injuries.”

In summary, direct insertion of the multifidus muscle onto the cervical facet capsular ligaments provides a mechanism by which multifidus activation can exacerbate whiplash injury potential. 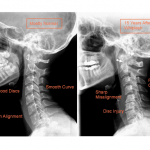