The purpose of this review is to provide an overview of the different methodologies and provide an up-to-date summary of recent findings with SPECT, PET, and MRS technologies, specifically after mTBI, as defined by standardized criteria. Given that the different physiological and pathological responses are heterogeneous, efforts will be made to separate studies at different time points after injury (acute, subacute, and chronic stages) as well as to the different types of mTBI such sports-related head injury where repetitive head injuries are much more common and may present a unique signature.

There is a significant need for objective measures to predict the clinical course of TBI patients. Clinical variables, including GCS scores, extent of amnesia, duration of ventilatory support, and duration of intensive care unit stay, have weak relationships with subsequent neuropsychiatric testing. Although some anatomic imaging findings such as the presence of blood or subarachnoid hemorrhage, intraventricular hemorrhage, edema, midline shift, effacement of the basal cisterns, and location of lesions have been found to be predictive of overall survival, they are not adequately predictive of functional outcome, even when clinical data are added.

Ultimately, functional outcome depends on how many neurons are preserved after injury. However, the location of damage and the ability of existing neurons to reorganize their connections to recover function are also critical. Neuronal injury is caused by direct injury, compression, ischemia, and diffuse axonal injury (DAI). DAI, which occurs in up to 48% of patients with closed head injuries, is caused by the shear force generated by the rapid deceleration in motor vehicle accidents. The force may either tear the axons or alter axoplasmic membranes, which subsequently impairs axoplasmic transport and results in delayed damage to axons. DAI usually is diffuse and bilateral, frequently involves the lobar white matter at the gray-white matter interface and may be reversible. Although DAI is rarely fatal, it can result in significant neurological impairment. The number of lesions correlates with poorer outcomes, and lesions in the supratentorial white matter, corpus callosum, and corona radiate correlate with a greater likelihood that the patient will remain in a persistent vegetative state. Whereas hemorrhagic axonal injury can be seen on CT as multiple foci of high attenuation, nonhemorrhagic injury can be missed. In fact, CT is abnormal in less than half of all patients with DAI.

MRI is generally more sensitive than CT for detecting neuronal damage. Patients with widespread MRI abnormalities or brain stem injuries usually show no significant neurological recovery, even when they have normal CT scans and intracranial pressures. However, aside from such obvious cases of devastating injury, a consistent relationship between MRI lesions and clinical or neuropsychological outcomes has not been demonstrated.

Various newer MR technologies may provide better information for prognosis and rehabilitation guidance. Investigators have used MTI to detect white matter abnormalities in multiple sclerosis, progressive multifocal leukoencephalopathy, and Wallerian degeneration. Through MTI, a magnetization transfer ratio can be derived and quantitatively measure the structural integrity of tissues. MTI changes have been found to be more sensitive than T2-weighted MRI in detecting histologic axonal damage in animal models. Bagley and colleagues, found associations between MTI abnormalities and neurological deficits.

Proton MR spectroscopy can detect the amount of creatinine, choline, myo-inositol, and N-acetylaspartate (NAA) in a selected tissue volume.113 NAA, whose function has not been clearly established, has been found to be a marker for neuronal loss in a wide variety of conditions including spinal cord injury, amyotrophic lateral sclerosis, Parkinson disease, Huntington disease, ischemic stroke, progressive multifocal leukoencephalopathy, epilepsy, and multiple sclerosis, as reviewed separately in the current volume. Animal models of brain injury have shown NAA levels to decrease within hours after injury. Several investigators have found lower NAA to creatinine ratios as measured by MR spectroscopy to correlate with poorer clinical outcomes. Finally, functional MRI studies by McAllister and colleagues, found persistent changes in the brain activation patterns of mild TBI patients compared with controls when given various working memory tasks.

SPECT can detect abnormalities in cerebral blood flow (CBF) as reviewed separately in the current volume. Not all alterations in cerebral blood flow are associated with lesions on CT and vice versa. In general, SPECT is more sensitive than CT in detecting lesions in TBI patients. However, it is not always clear whether the abnormalities observed on SPECT correspond to direct or indirect injury, or possibly abnormalities from prior trauma or other neuropsychiatric conditions. CBF abnormalities are commonly seen in mild TBI patients with chronic symptoms, even if no structural damage is apparent. Often the size of the lesion on SPECT exceeds the size of the lesion on CT or MRI.

SPECT appears to be better than CT or MRI in determining long-term prognosis. A negative initial SPECT scan after trauma seems to strongly predict a favorable clinical outcome. A worse prognosis is associated with larger lesions, multiple defects, and lesions in the brainstem, temporal lobes, parietal lobes, or basal ganglia. Abnormal SPECT can be predictive of neuropsychological deficits. Studies have found that decreased blood flow to various parts of the brain correlate with various types of behavior: the frontal lobes with disinhibitive behavior, the left cerebral hemisphere with increased social isolation, and the right hemispheric areas with increased aggressive behavior. Deficits in frontal lobe and thalamic perfusion have been linked to impairments in executive functioning. However, no consistent correlation between SPECT abnormalities and neuropsychological test scores has been established. Because MRI detects lesions missed by SPECT and vice versa, a combination of MR and SPECT may be even better for determining prognosis.

As reviewed separately in the current volume, PET measures the cerebral metabolism of various substrates, most commonly fluorodeoxyglucose in the measurement of glucose metabolism, which should correspond to neuronal viability. PET can also be used to diagnose patients with DAI to determine the extent of damage and prognosis. PET studies may help delineate reversible and irreversible lesions to direct therapeutic interventions toward preventing further damage. The major limitation of PET imaging is that it cannot distinguish between functional abnormalities associated and not associated with structural damage. In general, studies have found that cerebral dysfunction can extend far beyond the boundary of anatomical lesions and may even appear in locations remote from the trauma. Alavi and colleagues132 showed that approximately 33% of anatomical lesions were associated with larger and more widespread metabolic abnormalities. As much as 42% of PET abnormalities were not associated with any anatomical lesions observed on anatomical images. The metabolic effects of cortical contusions, intracranial hematoma, and resultant encephalomalacia are primarily confined to the site of injury, whereas those of subdural and epidural hematomas often are widespread and may even affect the contralateral hemisphere. DAI results in diffuse hypometabolism.

Videonystagmography (VNG) is a technology for testing inner ear and central motor functions, a process known as vestibular assessment. It involves the use of infrared goggles to trace eye movements during visual stimulation and positional changes. VNG can determine whether dizziness is caused by inner ear disease, particularly benign paroxysmal positional vertigo (BPPV), as opposed to some other cause such as low blood pressure or anxiety.

VNG testing is made up of several components. Patients are asked to wear goggles with sensitive video cameras in them to monitor eye movement. During the first portion of the testing, patients will be required to follow a dot on a screen with their eyes. The dot may go up, down, side to side, or jump around randomly.

The final part of the VNG requires caloric response testing.

In the future, the already significant role of imaging in guiding therapy may grow. Technological improvements continue to reduce scanning time and improve resolution. New methods are being developed to quantify damage on images and perhaps improve predictive power. A growing number of minimally invasive, image-guided techniques are replacing open surgical techniques. Imaging is increasingly vital to the development of new therapies and may be used to measure patient response to these therapies. Imaging has and will continue to influence therapy and may improve outcomes for what is clearly a significant health care problem. 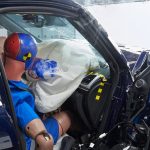