There is new epidemiological research out of Denmark that conclusively demonstrates a strong association between concussion and dementia, and I expect that it will become the go-to evidence for proving a causation in cases of dementia that have developed post-concussion. The name of the paper is Long-term risk of dementia among people with traumatic brain injury in Denmark: a population-based observational cohort study and it was published just last month in Lancet Psychiatry (April 2018).

The study is a very well designed and quite large epidemiological study; there were 2.8 million people included in the study, with 132,000 traumatic brain injuries (TBI) occurring among them, and 15 years of follow up.

The purpose of the study was to examine the relative frequency of a dementia diagnosis in people with a history of a TBI versus those without such a history. What made the study “well designed” was that the authors were able to account and control for virtually all contributory factors that could confound the relationship between TBI and dementia (i.e. act as a hidden cause). These factors included the usual demographic factors of age and sex, etc., but also included important medical and neurological illnesses (i.e. diabetes, heart disease, stroke, etc.) as well as pre and post-injury diagnoses of psychiatric illnesses such as depression, substance abuse, bipolar disorder, etc.

Controlling for psychiatric disorders was important for legal applications of the study results, because pre-existing psychiatric diagnosis is one of the most common explanations that defense neuropsychology and psychiatry experts point to when a post-TBI plaintiff develops symptoms of dementia. The expert somehow always finds that the condition must be due to some pre-existing disorder.

This type of a defense is essentially negated with this study, as the pre-existing conditions are all accounted for in the results. Below is the chart from the study showing the hazard ratios of dementia for both mild TBI (concussion) and severe TBI over time. A “hazard ratio” is essentially the same thing as a risk ratio, but for a specified period of time after the injury.

Based on these findings, for a previously healthy (non-demented) individual who sustains a concussion and develops new symptoms attributable to dementia within a year of the injury, the dementia was caused by the concussion, on a more probable than not basis. The usual defense that the condition was going to occur regardless of the injury because of some pre-injury and typically common psychiatric condition (like depression) is easily falsified with these result.

Motor vehicle trauma is the single most important agent in both fatal and mild brain injuries, causing from 60% to 67%. Earlier reports ranged from 40% to 60% caused by MVC with the most common diagnosis given, being concussion. Many of these MVC-related injuries are the result of blunt head injury (a.k.a. soft head injury) which describes contact with some object, but without penetration of the skull.

An example would be striking the steering wheel or door post. The term of choice today is traumatic brain injury (TBI) since it is the brain, rather than the head, that we are usually most concerned with. 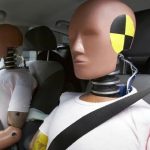